Gaining in popularity in Canterbury, the Louvered roofs from the outdoor living group offer a sleek look with expert installation.

Louvred roofs also known as a louvered pergola are adjustable outdoor frames that are common features of hotels, large patios, restaurants and decks. Louvered pergolas are either a part of the main property or free-standing structures. The major function of a pergola is to offer shade. However, it is a feature that can improve the design of a property. 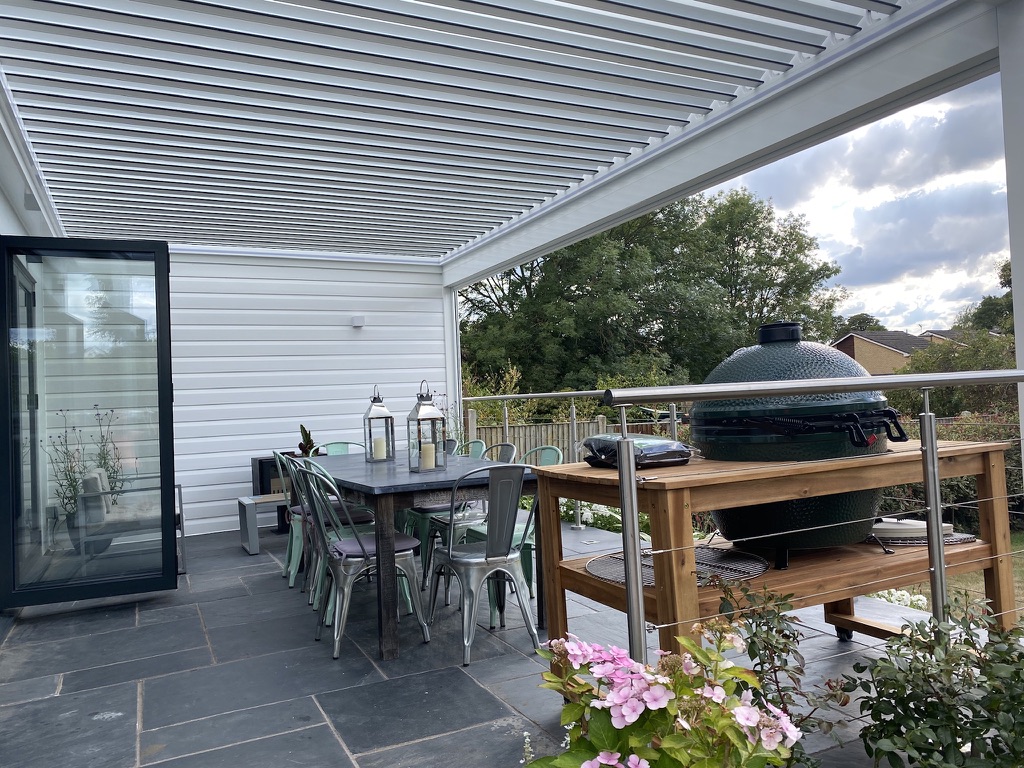 Pergolas have adjustable rotating louvers that make it possible for the sun's movement to be tracked. They can be adjusted to let in light or provide shade. The Outdoor Living Group's louvered roofs are adjustable, bioclimatic and versatile. Perfectly suited to homes in Canterbury. 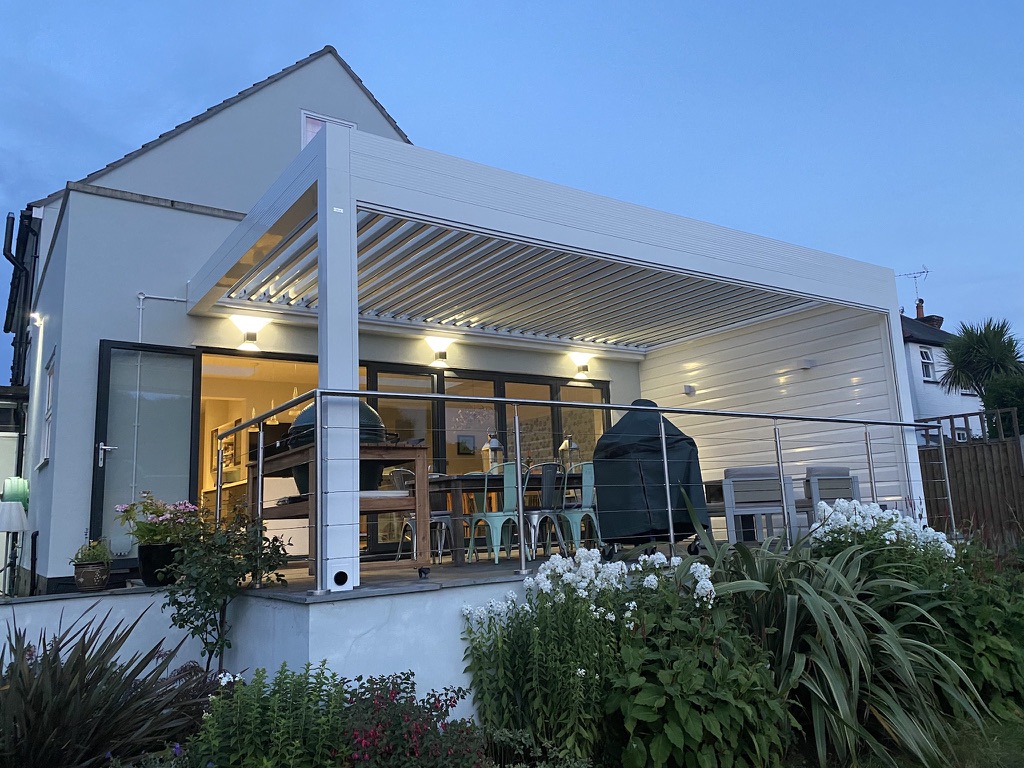 Louvered roofs that extend over your property protecting a garden or a porch or patio should look like they were meant to be part of your property. The Outdoor Living Group’s catalogue of louvered roofs is quite extensive. We have design experts who have had many years of experience in designing pergolas to match our customer’s needs. You may have ideas about what you want for your louvered roof over your outdoor space. We have the experience to design it, construct it and install it and complete your vision for the perfect outdoor space.

An innovative take on the standard Pergola roof, bioclimatic roof shade and ventilation can be customised. Bioclimatic roof louvers rotate to expel heat during warm summer months and keep in heats when it gets colder. On the remote there are four preset louver positions but the louvers can be changed between the different levels. The flexibility of our bioclimatic pergola roofs means you can transform your pergola into a closed outdoor space by adding heating, lighting, sliding glass panels and side shades. Depending on your requirements, our louvered roofs can be installed as part of your current building or as a lone single standing units. Whatever your requirement might be – a shaded area for your back door, garden or patio, we've got you covered!

We have a lot of technical innovations built into our louvered roofs. Our roofs are designed to allow no light gaps or leaks and do so without exposed gutters. With full control over the blades of the louvered roof, you can control the amount of sunlight that gets into your outdoor space at any time. With that you can control the microclimate of your outdoor space, perfect for gardens. Across Canterbury, our louvered roofs are completely flexible in design and can be adaptable to fit whatever needs you have. 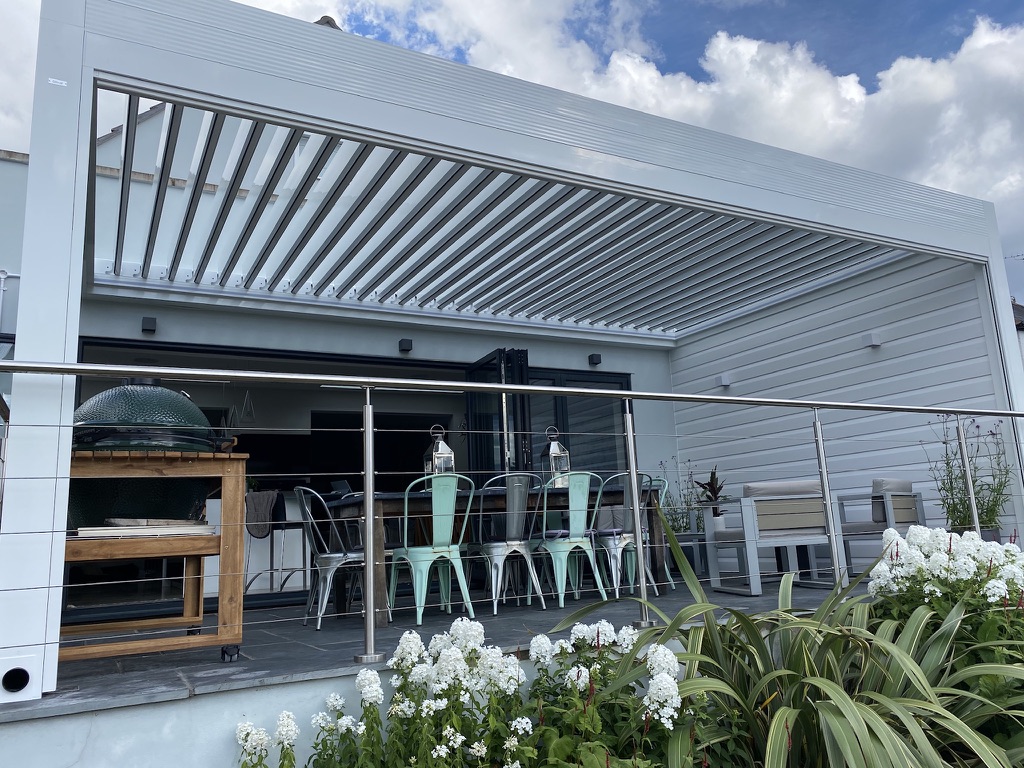 Ventilating your outdoor space is important and should be done quickly and efficiently so we build our bioclimatic pergolas to rotate the louvers from 0 to 135 degrees easily. Our louvered roof can be designed and constructed to be free standing. This can give you ample space to enjoy your garden or any other outdoor space without the restriction of an enclosed space. Our louvered roofs give you the choice to decide the amount of protection from the elements you desire. You can decide to shut out the weather in any season or let in as much sunlight as you want, well into late in the evening. Must a planning permission be obtained to install a louvered roof? Most houses in the UK will already have permitted development rights, so one can go ahead with installing a louvered roof.

It could take 1-2 days to install a louvered roof. The time taken is largely dependent on the size of the roof. If side glazing is a feature to be added to the roof, this could add another day to the installation time to make sure it’s done right.

The Price of louvered roofs.